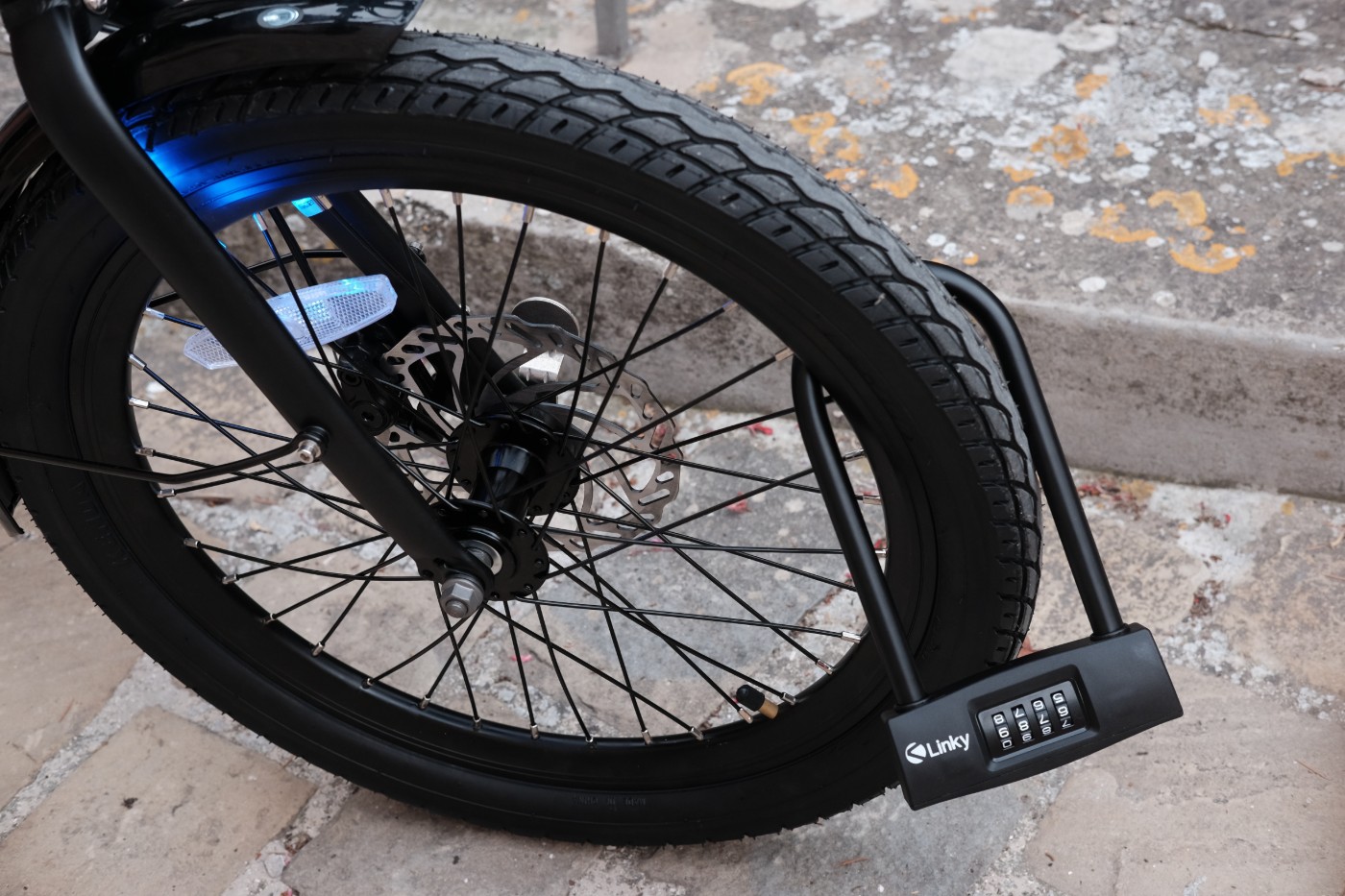 Bicycles are among the most stolen objects in the world. They’re useful, valuable, and very alluring to thieves everywhere.

Now put an expensive motor and battery on a bike – you’ve now got yourself a mouth-watering prize for bike thieves.

Electric bike owners need to be extra cautious when it comes to locking their bikes. Nothing feels worse than splurging a few grand on a shiny new bike, only to have it stolen because of a faulty locking system.

There is a proper way to lock up your electric bike as well as the proper equipment to use.

In this article, we’re going to be sharing some very useful tips and tricks that should help keep your bike safe from thieves. A lot of it comes down to buying the proper lock but there are additional things to consider too.

Don’t let the thieves get away with your precious – follow these ebike security tips!

How many bikes are stolen every year 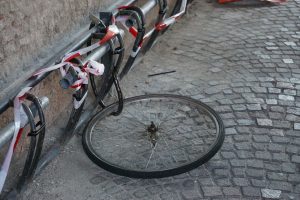 Heartbreaking when you come upon this…

Electric bikes are particularly at risk of being stolen. They’re more valuable, more obvious, and becoming more popular every day. To keep your electric bike safe from thieves, you’ll need to be on your guard.

Luckily, keeping your ebike safe doesn’t require special alarm systems or fancy devices. In fact, ebikes and regular bikes require a lot of the same precautions. That means using the proper bike lock, finding somewhere secure, and locking it properly. There are a couple of extra things you need to consider with ebikes, such as the battery, but nothing overwhelming.

How to keep your electric bike safe from thieves

Here are ten ways you can do now to keep your ebike secure.

1. Get a good ebike lock

This means getting something seriously strong. Chain and cable bike locks frankly just don’t cut it as thieves can actually cut through these using bolt cutters.

Your best bet is to always get something like a u-lock as these are tough enough to withstand most thieves’ attempts. And whilst there are some pretty fancy u-locks on the market, the classic u-lock with a lock and key or a combination still works fine. Linky uses U-locks with a combination and we haven’t had a bike stolen yet. 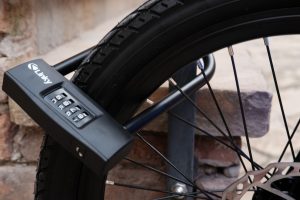 Some ebikes actually have their own self-locking system as well. Whilst these are pretty cool, you’ll need to make sure they’re up to standard. At the end of the day, nothing beats a good ol’ fashion external lock.

TIP: When riding your ebike, carry your u-lock on your belt if you’re wearing one. Nothing is more annoying than an unsecured lock rattling on the handlebars when riding. It’ll chip the hell out of the paint as well!

2. Maybe get a second lock while you’re at it

This might be overkill for some but it will make your ebike EXTRA safe from no-gooders. Locking your bike with two locks means that thieves have to do twice the work to steal, which might be enough to discourage them.

Your second doesn’t necessarily need to be as strong as your first lock. If you have a good u-lock already, a chain or cable lock can serve as your second. Secure the frame of the bike with the u-lock (using the method described next) and then secure the bike elsewhere using the chain/cable. Pass it through both wheels and then around another secure point.

3. Secure the bike via the frame

This is bike security 101 folks: always secure your bike on a secure part of the frame.

Certain parts of a bicycle are easier to navigate around and bypass for thieves. For example, if you lock a bike below the handlebars, the thieves just have to remove the handlebar itself, lift it, and the bike is free. Another example is if you lock the bike at the wheel; if the thief removes the wheel, the rest of the bike is no longer secured is it?

Locking your bike in a way so that it is actually locked seems like common sense. But when people are in a rush or just complacent with locking, they can easily ignore where they’re actually attaching the lock. Choose the wrong spot and trouble can follow.

Do you see what’s wrong with this picture?

Electric bikes with step-through frames are a bit trickier because their frames are intentionally left open – there is no bar connecting the handlebars with the seat. There should be a rear triangle on the bike that you can run a lock through still. Do this and make sure to lock the rear wheel as well.

The biggest thing that thieves have to battle against, besides the ebike locks themselves, is time. In order to succeed, bike thieves have to be quick otherwise the chances of them being caught increase.

If you make it difficult for thieves to steal your bike, they’ll get discouraged and give up.

Making sure the bike is locked correctly and to a secure location are great starts. But this is where we can start to get a little creative and have some fun with would-be thieves.

Ever seen a group of bikes locked together but not actually secured to anything? This is because if someone wanted to walk away with one bike, they’d have to walk with ALL of them. Can you imagine how difficult it would be to walk with five bikes at one time?

Another example: lock your bike to a couple of grocery carts at the market. Sure, one car is easy enough to walk away with, but towing three or four? That would be ridiculous.

5. Choose the right place to lock your bike

It’s just about how you lock up your ebike – it’s also where.

When you’re in a rush, it’s easy to leave and lock your bike up to the first thing that seems secure. A lot of objects are deceptively easy to get around though. 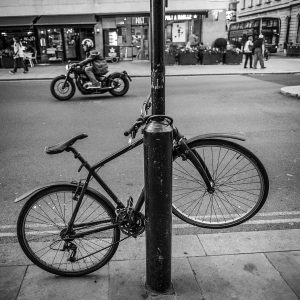 Chain-link fences are notoriously easy to cut through. Stop signs? Committed thieves have actually unscrewed the sign and then lifted the bike up and over the pole. That rickety old park bench that could be broken with a few powerful kicks? Not a good place to lock up to.

Moral of the story: whatever you’re locking your bike to, make sure it’s bomb-proof. If you have a solid base and the bike is locked securely by the frame, the thief is going to have a real hard time.

6. Take the parts with you or lock them individually

Riders have resorted to removing the rear or front wheels of regular bikes and taking them with them in the past. That way, there’s less for the thief to take.

The same principle applies when trying to keep your electric bike safe as well, if not more so. Electric bikes use a lot more expensive components than regular after all. There’s a motor, a display screen, and, most alluring to thieves, a battery.

If your bike allows it, take the expensive parts with you after you lock your electric bike. Many ebikes, including the entire Linky line, feature removable batteries.

If the expensive parts of your bike aren’t removable and aren’t secure either, the alternative would be to lock them individually. Make sure that your main lock passes through or around these parts or use separate locks. Again, pay special attention to your ebike’s battery.

Fellow working adults: the days of us returning home and just dumping the bike in the front lawn like eager kids are unfortunately over. Whilst I would love to just prop my bike on the front step after a sweaty bike commute home, this is not the way to keep it safe at home.

When parking your bike at home, put it somewhere private and out of sight. Put it inside the garage, a shed, or inside your actual house. The backyard doesn’t count: thieves can go back there and just take it too. 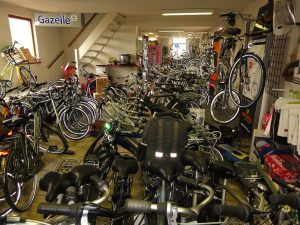 A lot of bikers insist on securing their bikes even at home. If there is a home break-in, bikes are usually easy targets (and maybe even a getaway vehicle!)

Interestingly, most burglars will spend time scoping a neighborhood or home out before actually breaking in. So imagine that if you’re always riding around with your bike or leave it unattended at home, a potential thief might notice this behavior.

In short, keep your ebike safe and out of sight at home.

8. Lock the bike somewhere public when outside

We mentioned earlier that thieves don’t like extra attention when they’re working on bikes. If you lock your bike somewhere super busy, the chances of them going unnoticed are very unlikely. The last thing they would want is to be caught.

Make sure wherever you leave your bike is:

The most common place to park your bike in public is a bike rack, which may or may not have seen better days. Increasingly popular though are public bike garages. These range from simple facilities to futuristic centers complete with automated racking systems and hydraulics. If you’ve ever biked around Amsterdam before, you may have noticed one or two of these before.

Admittedly, camouflaging your bike might not be totally necessary and might feel a bit over-the-top. But in all seriousness, I’ve heard of riders who go to great lengths to disguise their bikes and haven’t one stolen yet.

Some people go to great lengths to “uglify” their bikes because they believe that thieves will be less interested in a beater. This article over at Treehugger will actually show you how to make your bike look like the shabbiest on the block. 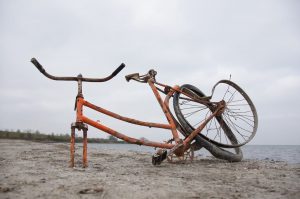 Maybe not that destroyed…you get the idea.

Is making your bike less appealing worthwhile? It’s certainly one way to steer away potential thieves. You’ll become the person riding around town with the worst bike it seems but, hey, an ugly bike is better than no bike maybe.

10. Register the bike and get some insurance

If your bike is stolen, having some record of ownership will pay off. If your bike should turn up again, either in the custody of the police or just on the street, having some proof that you own the bike will make it easier to reclaim the bike.

Almost every bike has some sort of serial number attached to it. On Linky ebikes, it’s located under the crank towards the front. Write this number and save it somewhere. Take a picture while you’re at it.

Here’s a cool trick: write down your contact information on a piece of paper and hide it somewhere inside the bike frame. The tubes where you insert the bike seat or frame are good places. This is extra insurance in case the robber decides to file away or remove the original serial number.

Should the worst come to worst and your bike is gone forever, having some insurance will at least allow you to buy a new one.

Note that traditional homeowners or personal items insurance will most likely not cover your ebike in case of theft. Rather you’ll need to get some sort of special electric bike insurance.

Here are the types of bicycle locks available on the market today: 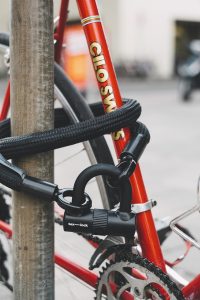 A cable lock can be pretty handy but are not always strong enough.