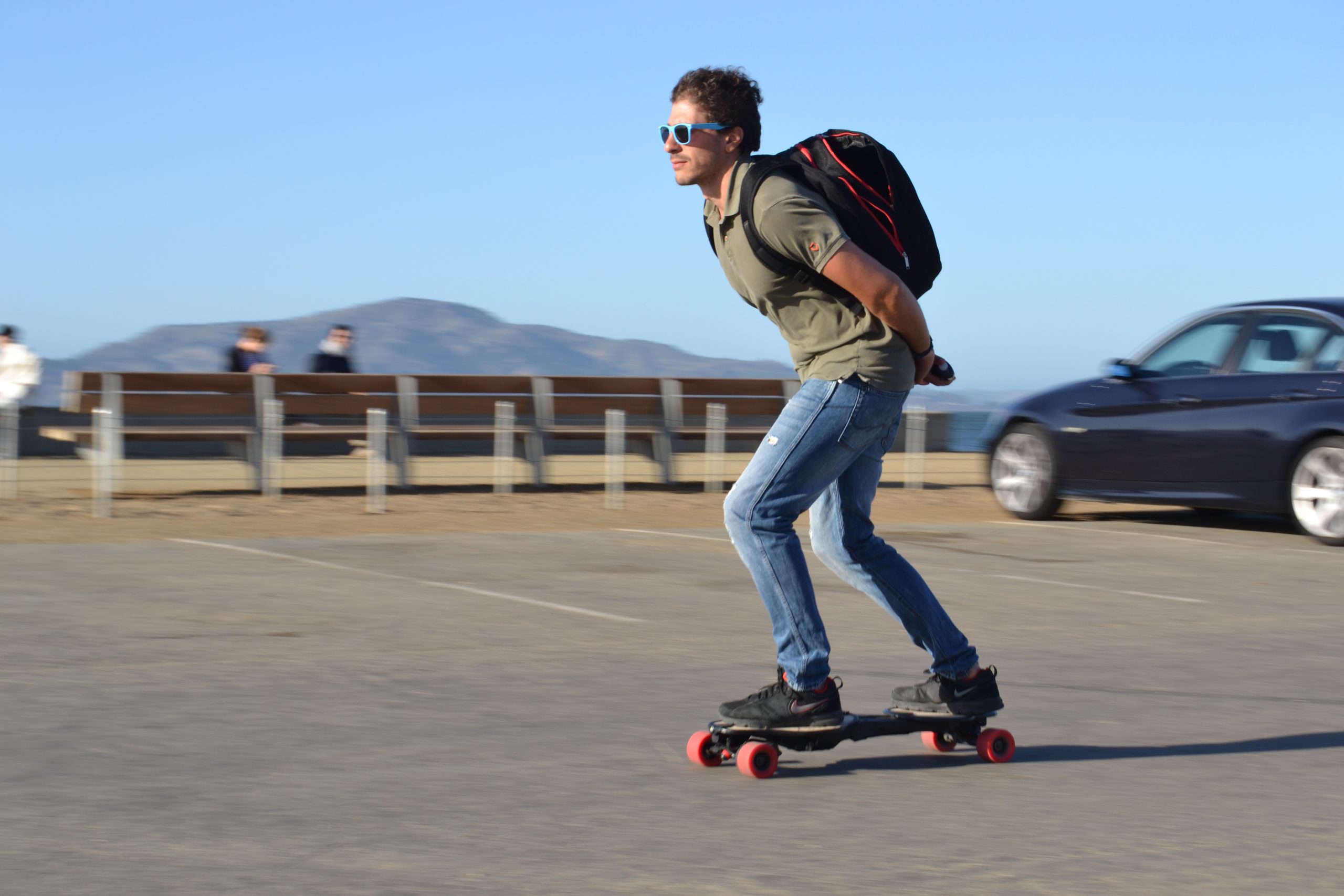 23 Jun How to Go Faster on a Electric Longboard

Sometimes, you just want to go fast, to feel the wind on your face, your heart racing, the adrenaline pumping through your veins.

Going fast on an electric skateboard is a whole other monster! To be propelled forward so fast by such a little device is an impressive thing, not to mention a total rush.

But not all electric skateboards are built for speed. Some are (much) slower than others.

If you have an electric skateboard that struggles with speed or an already decent board that you’re trying to make even faster, this article is for you. In it, we’ll cover what exactly factors into electric skateboard speed as well what you can do to improve it. Everyone has something to gain here.

Are you ready to go speed demons?

How fast does an electric skateboard typically go?

Different electric skateboards have different top speeds. Some can’t go that fast and struggle to break even 20 MPH, mostly due to mediocre parts. Others are absolute speed demons that can easily go over 40 MPH if you don’t hold back.

Most electric skateboards average around 20-25 MPH on a normal day. If you are a good rider and the conditions are right though, you could potentially go faster than this. 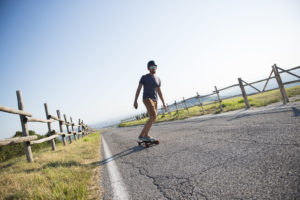 Parts and build quality play a huge role in how fast an electric skateboard can go. Voltage, battery output, and motor power are arguably the most important things that dictate the max speed.

That being said, factors like environmental conditions, rider technique, and additional customization can also heavily influence electric skateboard speed. If you do everything right and ride in the right place at the right time, you could overcome potential weaknesses in your board’s performance, such as a bad battery or subpar motor.

The following are nine actionable tips that you can do to make your electric skateboard or longboard go faster.

The larger the wheel, the faster the board. This mainly happens for two reasons:

On the flip side, larger wheels will accelerate more slowly compared to smaller ones. In a hypothetical race, a board with smaller wheels will appear to move faster at first. But eventually, the smaller wheel will achieve its max speed before the larger one does, at which it’s bound to be passed.

They may take a bit of time to gain speed, but the larger wheels will be faster over a longer distance. 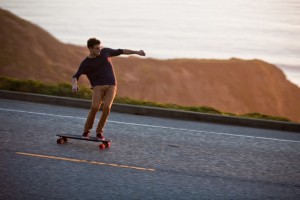 The easiest way to go fast on your board? Go downhill. Good ol’ momentum and gravity are always great for adding a little extra speed.

Just know that downhill riding is a very serious thing. People get hurt all the time, mostly because they gain too much speed and lose control. Next thing you know, they hit a rock or the side of the curb and go flying into the distance. What happens next often is never good.

If you’re going to be hitting the urban slopes, you must be extra careful. You must absolutely be a competent rider and know how to bail in case of an accident. Otherwise, all the extra speed is going to get you seriously hurt.

Riding faster and pushing your motor to its limit requires more and more energy. If a battery is not able to meet the energy demands it will cause voltage sag – a phenomenon where performance drops due to a lack of supply. A drop in performance means a drop in speed.

In order to guarantee that your battery can supply enough power to achieve the fastest speeds possible, make sure it is fully charged before you go out with it. Get in the habit of plugging it in-between usages, like while you’re at work or chilling at a coffee shop. That way, it’ll always be ready. 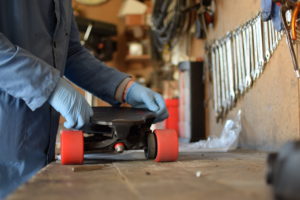 There are ways to increase your electric skateboard’s speed mechanically as well (as opposed to electrically or via your technique).

Moving parts like the wheels and bearings all play a huge part in speed. If something is interfering with any one of these, such as dirt, debris, or rust, then the rest of the board is affected as well. Speed then decreases.

Regularly check and clean your board’s parts. Make sure the bearings are still in working order (they will degrade over time) and that the wheels are lubricated.

If you were to flip your board upside and spin the wheel with your hand, it should keep on turning for as close to indefinitely as possible. This means the wheel is smooth and unobstructed, which will then make for a faster board.

Not all bearings are created equal either – some are faster than others. A lot of riders swear that ceramic bearings, rather than steel or titanium ones, are the best for speed.

Are you sure you’re using your electric skateboard to the fullest? Did you know there is the possibility that it might be limiting itself depending on how it is set up?

Some e-boards come with selectable riding modes. These modes, which inhibit and unlock the board’s drive system via software, are each meant for a different kind of riding. For example, one mode might be good for saving the battery and extending riding range whilst another might be best for quickness.

If your electric skateboard comes with unique riding modes, make sure you understand them. Otherwise, you might accidentally be using a mode that is purposefully slowing down your board. 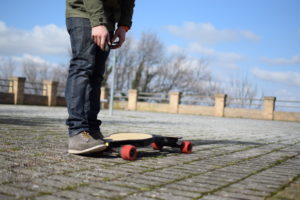 The best roads for riding are smooth, level, and completely clear of debris. Smooth pavement and fresh tarmac are a skateboarder’s best friends.

What’s not great is old, cracked concrete or roads littered with pebbles or other kinds of litter. Imperfections and little obstructions like these slow the board down, not to mention increase the chances of you being pitched.

City streets are also busy, which means you’ll have to stop and slow down frequently. The best way to gain speed is by moving uninterrupted so maybe the city won’t necessarily be the best place. A nice, empty road in the middle of nowhere, on the other hand, sounds more promising.

So do some research and try to find the right places to ride. The better the surface, the faster you can go.

Use the right posture

Your body creates extra surface area, which in turn creates extra air resistance that your electric skateboard’s motor has to compensate for.

Rather than standing totally upright and maximizing your surface, attempt to minimize it instead by tucking your body. The fewer places there are for your body to be hit by incoming airflow, the less resistance it creates.

Have you ever seen how downhill longboarders stand on their boards? They tuck themselves into almost a kneeling position so the wind and air travel practically right around them. Not only that, they’ve eliminated potential air pockets in your body’s posture – such as the ones created when you hold your arms at your side – that could potentially slow them down.

Emulate these speedrunners and reduce the number of places where your body might drag the board down. Otherwise, you’ll only be making the engine work harder.

Light as a feather.

The heavier the rider, the slower the board. Electric skateboard motors can only tow so many pounds or kilograms – the more there are, the less the motor is able to cope.

If the electric skateboard motor has to pull less weight, it can run faster and more efficiently.

Now, that doesn’t necessarily mean that riders need to hit the gym and lose a few pounds (although it certainly wouldn’t hurt). They can cut weight in other ways, such as carrying fewer things on them.

A lot of people have a tendency to overstuff their skateboard backpacks while riding. These bags could be adding an additional 5-10 kilos sometimes. That’s just extra weight that the motor needs to deal with. If you really want to go fast, maybe consider ditching the heavy backpack altogether.

If you’ve already done everything on this list and still can’t get your electric skateboard to go as fast as you want, then just leaves one option: buy a new board.

Ultimately, hardware plays a huge role in performance. If your electric skateboard just straight-up has a terrible battery or a weak motor, no amount of weight loss or technique or calibrating is going to make it go faster. Sometimes, a bad board is just a bad board.

Shop around a bit and see if there’s a better electric skateboard for you. First, ask yourself how fast you really want to ride and then see what models are rated to go that fast. If you follow the tips outlined in this article, you may just manage to squeeze a couple of extra MPH out of it too.

We need to spend a little extra time covering rider safety, especially given the subject matter of this article.

Most skateboard and longboard accidents happen because the rider is a novice and they try to do too much too soon e.g. go too fast or ride on dangerous terrain. They then lose control and end up getting hurt. 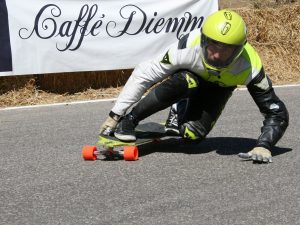 Seriously, 20-25 MPH may not seem fast – it is, after all, the average speed limit in most residential areas. But it is fast for an electric longboard! At those speeds, controlling an e-board and staying balanced can really be difficult.

At 40 MPH, things can get real hectic. You absolutely better have some sort of protection and really know what you’re doing.

The point is: before riders start thinking about fast they can go, they should first consider how fast they ought to go. Honestly, you don’t necessarily have to go faster than 20-25 MPH – anything more than this and just for the sake of speed itself. Practicality kinda takes a back seat at that point.

So do you need the fastest electric skateboard in existence? Unless you’re a professional racer, probably not. All you need is a board that is fast (and safe) enough.

So there you have them: nine ways to increase the speed of your electric skateboard. Although each one may only give a humble boost speed, doing them all together could really make the difference.

Of course, if all else fails, you could just buy a new, faster electric skateboard. Linky owners might consider upgrading as well: the upcoming Linky 2.0 will have two motors, making it both faster and better able to handle hills.

Please don’t forget to stay safe out there either. With more speed comes more problems. Riders shouldn’t really be considering increasing speed until they’re competent enough to handle what they already have.

Do you have any tips for staying safe while riding at high speeds or have some additional speed-boosting tips that we missed? Please leave a comment below and let everyone know what they are.