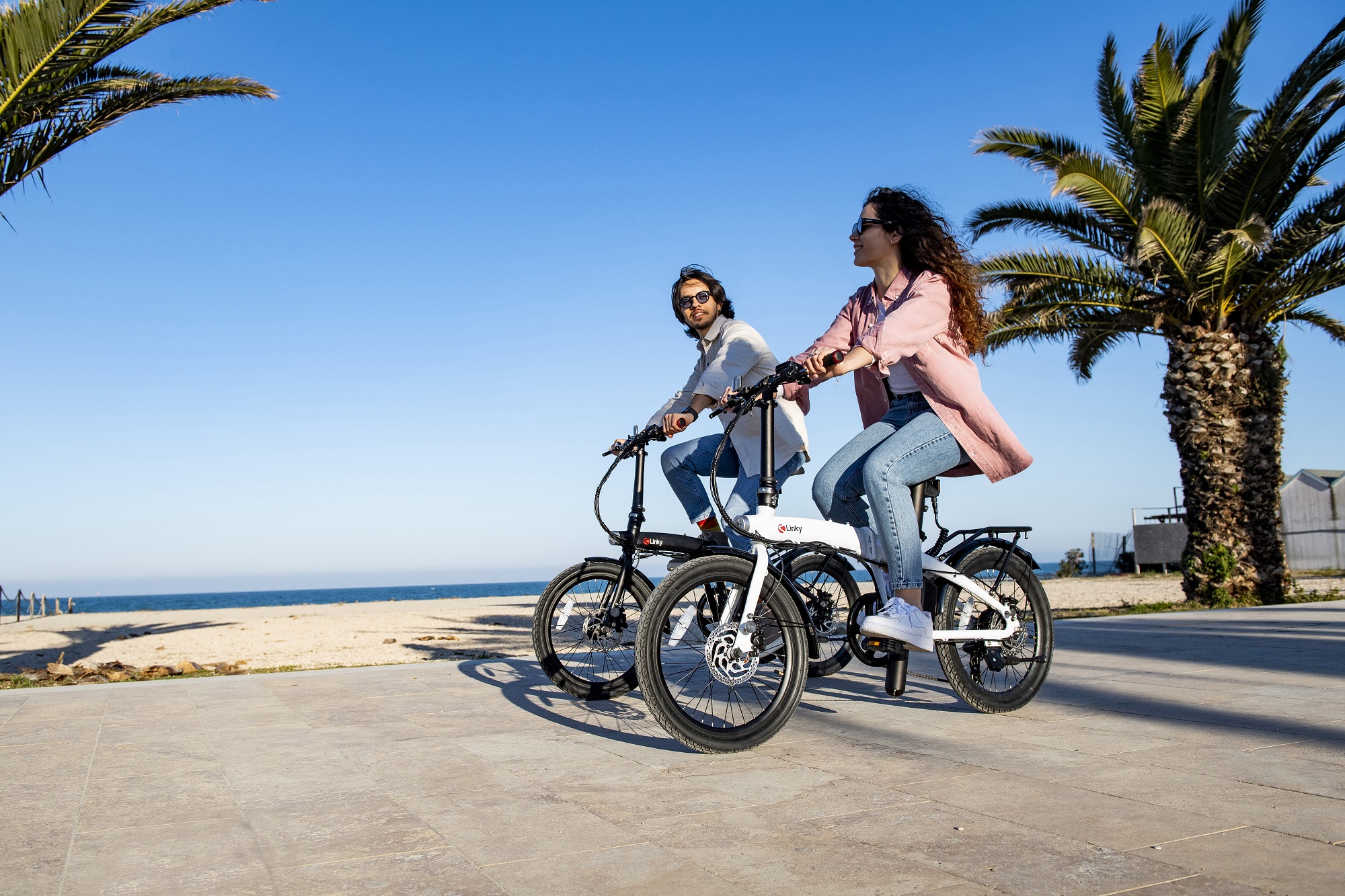 18 Jun How to Ride an Electric Bike (The Right Way)

Most people learn how to ride their electric bikes like a conventional bike: they get a push, start pedaling, switch a few gears, and next thing you know they’re off. It’s to be expected as electric bikes and regular bikes do function very similarly on a fundamental level. One just has a motor and battery attached.

But did you know that there are particular ways to use your electric bike that will allow you to ride faster, longer, and, crucially, more safely?

For example, having a faster pedaling cadence can not only be a smoother ride but can also help conserve your battery. This goes somewhat against the logic of conventional biking in some ways!

This article is intended as a review of how to ride an electric bike properly. Perhaps you’re looking to buy and want to study first how to actually use one. Perhaps you already own an ebike and are looking for some additional tips. We’ve got it all covered here!

So stick around and find out just how fun and easy it is to ride an electric bike.

Understanding how your electric bike works

Without overcomplicating things, electric bikes are essentially the same as conventional, human-powered bikes with a few extra bells and whistles. Working in tandem with one another, those added components make for a smoother and quicker journey.

The concept of an ebike is simple: by adding a motor to a regular bicycle and powering it with a battery, the wheels of a bike can be turned with less assistance from the rider. Many modern electric bikes also incorporate internal sensors and basic computers to help regulate the entire system as well.

Here are the parts that you should be aware of before riding your electric bike:

How to ride an electric bike

How easy is it to ride an electric bike? About as easy as it is to ride a regular bike! 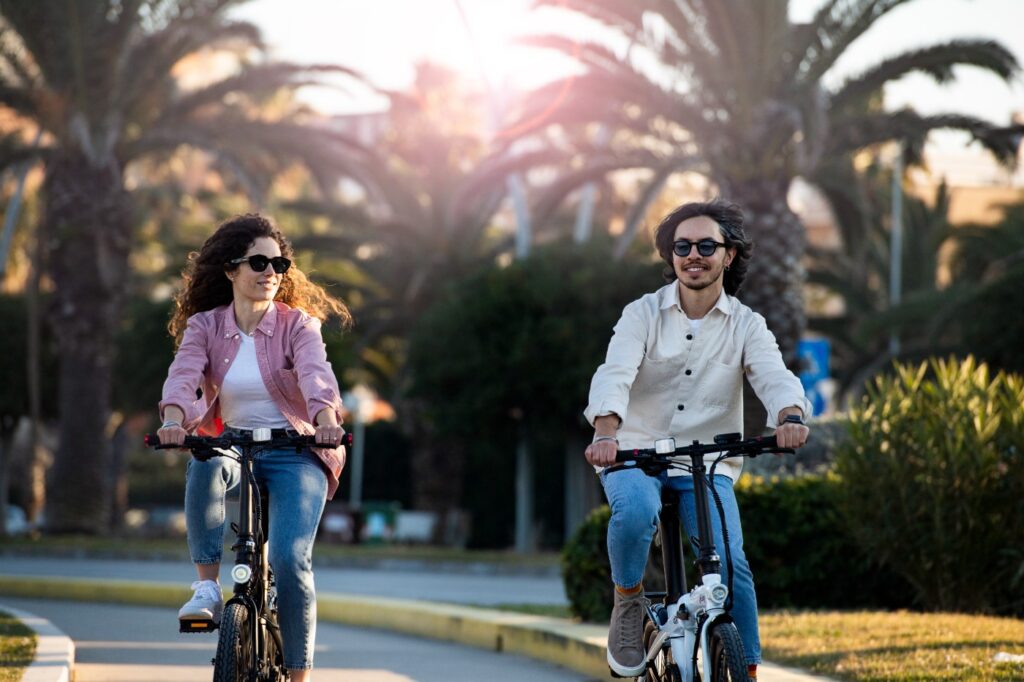 Riding an electric bike is about enjoying yourself, not necessarily going fast.

We’ve heard a couple of people ask if knowing how to ride a regular bike is necessary to ride an electric bike and our answer is usually “it certainly doesn’t hurt!” Although electric bikes require some extra attention, they are not so different from their analog predecessors. One could learn how to ride a bike using either in fact.

Let’s assume you already know how to ride a regular bike though. Luckily, riding an electric bike is very similar to riding a conventional one, with a few extra things to consider.

Before the first ride

First thing’s first: you need to check your ebike for actually riding it. Make sure that:

If everything looks good, the next thing is to actually mount. Adjust the seat, check the mirrors if you have them, and switch on the electrical components. If you have difficulty mounting, some bikes actually use a special kind of frame called a step-through, which is missing the top bar that usually connects the seat to the handlebars. These can be easier to ride for some people.

Once you’ve turned on your electric bike, check to see if the appropriate gear and assistance mode is selected. While you’re at it, pedal the bike a bit just to make sure the motor responds.

The first thing you might notice is the motor and pedal assistance kicking in. Before you actually start riding though, it would pay to know what kind of pedal assistance your ebike provides and how it behaves. Some bikes with a more sensitive cadence system will start accelerating immediately. Others may take a bit longer to kick and won’t start until you reach a certain speed or cadence.

On the subject of pedals, you do have to use them in order to ride an electric bike. Whilst many ebikes have a throttle that can be relied upon, you’ll still need to pedal in order to get the most of the bike. Pedalling also helps to conserve the battery.

QUICK TIP: you generally want to pedal faster i.e. have faster cadence when using electric bikes, at least compared to regular bikes. This allows the bike to run more smoothly and helps to preserve the battery longer. This is especially the case when you’re riding your electric bike uphill. 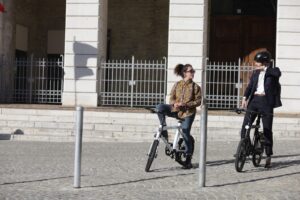 Be aware of the gears you are using and which riding mode you’re in. You don’t want to be using a gear that is too low or a riding mode that is too active. Both will drain your battery very quickly. You need to find a fine balance between which gear and riding modes you use. Linky bikes have six riding modes and seven gears, which results in 42 possible combinations!

If you’d like to learn more about how to use electric bicycle gears, then check out our in-depth article where we talk all about them.

Finally, maintain the correct posture when riding an electric bike. You don’t want to stand up and push down on the pedals with all your force as you might on a conventional bike. Causing an electric bike to sway can sometimes confuse the motor and electric components, which will in turn cause the bike to slow down. Just sit facing forward and enjoy the ride.

How do you ride an electric bike uphill anyway?

If you’re on the road, you just need to put the bike in the right gear and the motor will do the rest. (Be prepared to be amazed by the hill-climbing powers of the ebike!) If you really want to conquer the hills though, having a bike with a mid-drive motor is best though rear hub motors do well too.

Climbing hills off-road is a bit trickier though as you’ll need to consider terrain and body position more. You’ll want to really nail your gear choice as well as the pedaling cadence when going up steeper sections and be on the lookout for debris that might catch the pedals. Remember to stay seated on the bike but lean forward a bit more than usual to keep the center of gravity over the front wheel.

When you’re ready to stop, it’s just a matter of slowing down either using the brakes or coasting to a halt.

Regarding braking: because electric bikes have increased mass and are usually traveling at faster speeds than regular bikes, it takes longer for them to brake. That means you shouldn’t brake at the exact moment you reach an intersection or see an obstacle directly in front of you. Start breaking ahead of time so that your bike will be able to lose momentum and inertia. 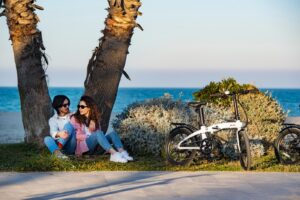 In some cases, the final destination is better than the journey itself.

Once you’ve come to stop, it’s just a matter of finding a place to park your bike. Make sure you find somewhere secure and always use a good U-lock (and never the cable variety). Always lock the bike properly.

Most likely, you will need to give your battery a quick charge as well. If you’re commuting to or from work and traveled more than 10-15 miles one way, you will definitely want to charge the battery. Park the bike near a charging station or, if your ebike has a removable battery, carry it with you wherever you’re going.

Besides remembering to brake early, there are some other things that you need to remember when riding your ebike safely, such as:

Be even more aware of traffic

Despite the growing popularity of commuter ebikes, many drivers don’t know how to behave around them. Most don’t expect them to be so nimble or reach 25+ miles per hour, neither do they factor any of this when driving. If drivers misjudge the speed or position of the bike, accidents can happen.

So be sure to be EXTRA defensive when using an electric road bike. Keep plenty of space between you and them and try your best to communicate what you intend to do. If the drivers know, the situation will be much safer.

Don’t go too fast too soon

Most people start to quickly and dial their bike speeds to the max without knowing how to use it first. Although riding an ebike is relatively straightforward, you need to get a feel for it first. The bike’s center of gravity, gear-shifting and level of assistance can vary quite a lot. Some bikes accelerate very quickly whilst others are smoother and take their time. Start slowly and understand the nuances of your particular electric bike first before going full throttle with it. 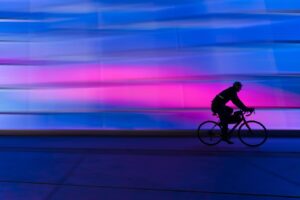 Be especially careful when riding in the dark.

Like a car or anything with a motor for that matter, you generally want to avoid accelerating on corners. Electric ebikes behave in the same way – if you accelerate on a corner too quickly, you run the risk of losing control of the bike. Rather, coast or brake slightly when going around corners and accelerate again once you’ve cleared it.

Don’t fixate on your smartphone or screen

If you attach your smartphone to the handlebars (you can do so using this accessory) and use it as a GPS device, it can be very easy to get distracted. If you’re looking at your phone, you’re not looking at the road and then accidents happen. Having a screen mounted on your ebike is very useful but you need to use it safely. Make sure your surroundings are clear or pullover to check.

Remember that you’re still riding a bike, even if it has a battery and motor installed. This means you need to follow all of the usual precautions such as:

FAQ: Where and when can I ride my electric bike

We’re often asked quite often when and where exactly is best to ride your electric bike. Here are some common questions and answers:

Can you ride an electric bike on the sidewalk?

If you want to be that person who skips over traffic by going rogue on the sidewalk, we won’t stop you. This is generally frowned upon by fellow pedestrians and sometimes even illegal. Don’t think you’re Officer Gordon in The Dark Knight hoppin’ curbs left and right.

Some sidewalks are wide enough to accommodate both pedestrians and bicycle riders though. You usually see this at the beach or in touristy areas. In this case, you could ride your ebike on the sidewalk – just make sure to check first. 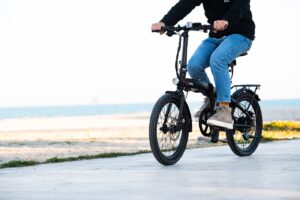 Some sidewalks are ok to ride on, others not. It all depends on where you are.

Can you ride an electric bike on the road?

Yes and no. Whilst electric bikes are often used by commuters and as road bikes very often, electric bikes are treated differently by the law. If you intend to ride your electric bike somewhere public, you’ll need to make sure it is legal first in your country or region. For example, class 1 and 2 bikes are restricted to bike lanes in the USA, whilst class 3 bikes are generally allowed only on the road.

TL;DR Check the local laws first before riding your bike on the main roads.

Where can you ride an electric mountain bike?

Most mountain bikes, especially eMTBs, can only be ridden on certain trails.

Can you ride an electric bike in the rain?

Most ebikes are resistant to rain up to a certain degree. Make sure to check how much with the manufacturer.

Do you need a license to ride an electric bike?

Each country and region will have its own ebike laws. In most cases, electric bikes do not require a license, insurance, or registration to use.

Riders do need to be a certain age though. In the UK, the rider must be 14 years old whilst in the US only 12.

Do you have a particular way of riding your electric bike? Is there a special trick or habit that you absolutely can’t neglect? Let us know in the comment section below!